Dr. David Palozej was born and raised in Ellington, CT. He moved to Boston following his high school graduation, where he did his undergraduate studies at Boston College. Dr. Palozej then earned his Doctor of Optometry degree from the New England College of Optometry. He graduated with honors and is a member of Beta Sigma Kappa, the National Honors Society for Optometry. Upon graduation in 1986, Dr. Palozej entered into private practice where he has remained for over 27 years.

Dr. Palozej currently lives in Ellington with his wife Colleen, their youngest daughter Riley and their dog, Joe. His oldest daughter Hayley, is currently in graduate school in Virginia and his middle daughter Olivia, is in college in Connecticut. Dr. Palozej enjoys golf, travel and the Red Sox! 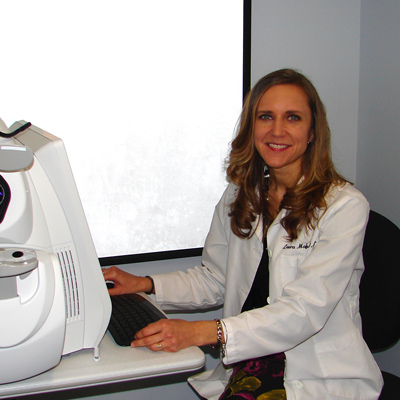 Dr. Laura Mafuz received her Doctor of Optometry degree in 2006, graduating with honors from The Ohio State University College of Optometry.  Her training included an ocular disease externship at the Columbus VA Ambulatory Care Center, and clinical internships in specialty contact lens fitting and pediatrics.

A Connecticut native, Dr. Mafuz returned to Connecticut after graduation where she worked in a contact lens practice prior to joining David E. Palozej Eyecare in 2008. Dr. Mafuz lives in Ellington with her husband Hakeem and their two children Dominic and Sophia. They enjoy spending time together and the whole family is currently training in the martial art of Kempo, with the goal of obtaining their black belts.

Get in touch with us to ask questions or schedule an appointment.
Contact Us